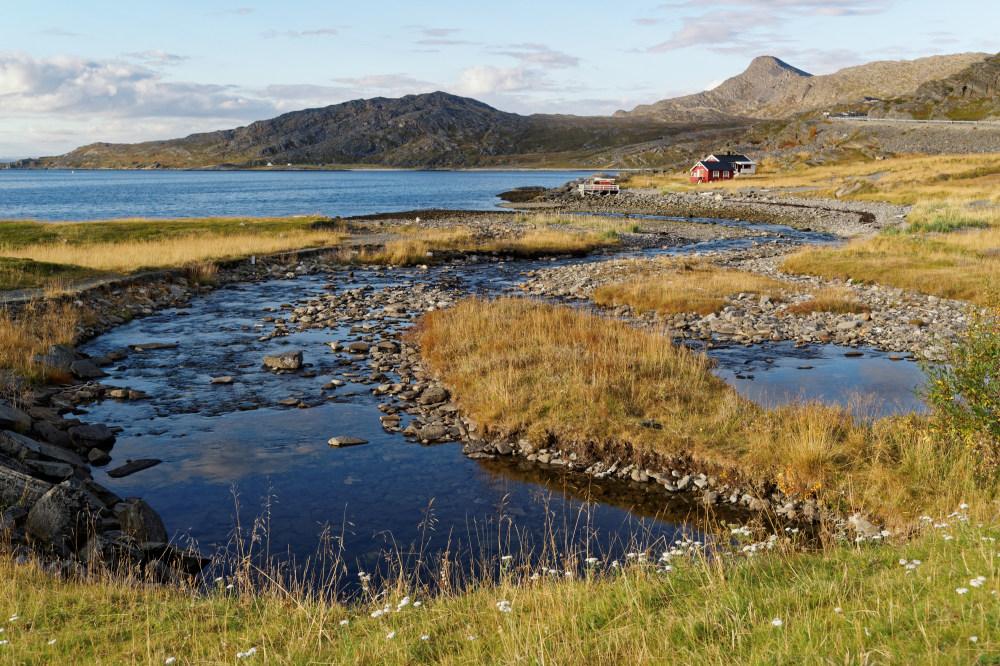 After all those warm nights we had a cold clear one which my sleeping bag couldn’t cope with, though some residual dampness of the tent may have been a factor. Aurora activity was forecast to be low but I looked up anyway as I got up in the night to don clothing to provide some warmth, but saw nothing. In the morning, the owner told us he’d walked down to the fjord in the night and seen a display. As we were leaving, the French cyclist was riding towards us. He’d been wild camping beside two Polish hitch hikers who’d set their watches for every hour to check the sky and had seen nothing. He had a few spare days before his flight so was going for a ride to Hammerfest.

The turning for route 889 to Havøysund wasn’t far along the road, we were riding up the less busy west side to avoid the long tunnels. The coastline was beautiful with very little traffic, a good decision. We soon lost the early sunshine but it returned in time for our picnic lunch and remained for the rest of the day. It was a fantastic ride with coastal and mountain scenery as we rode next to the fjord and over a couple of passes. We had our first bike problem, I’d again made the mistake of failing to check for loose nuts and bolts and I’d lost one from my rear pannier rack. I was carrying spares so it was easily remedied. Then Christine’s gears started playing up and she couldn’t get the high ones.

We reached Havøysund at 18:30. The only accommodation we could find online was a hotel at 1450 kroner per night which didn’t even have good reviews but we spotted a sign advertising rooms available with a phone number. Luckily the owner happened to be right by the sign and rented us an apartment for 600 kroner so we could also cook for ourselves. We were his first ever British guests, mostly they were from Russia and Scandinavia, with a few Germans. He told us it was snowing this time last year and that the summer had been wet. We popped out to the Co-op for food and slept well.