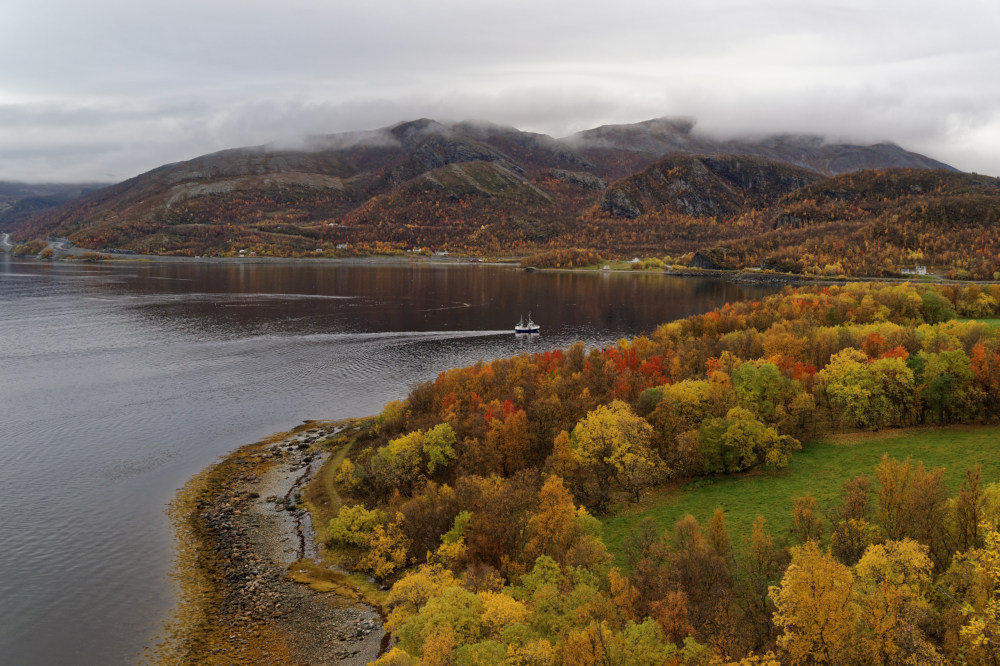 Another cloudy night, a disappointment as the aurora forecast was promising, and a shower around 05:00 meant we had a wet tent to pack. After breakfast we resumed our eastward passage along the E6. Although our destination is the most northerly point of the continent, our night’s camping spot would be south of where we started. It was another perfectly calm day with low mist, feeling cold in the damp air. The road looked to be along the coast on the map but was slightly inland so there were more ups and downs than we’d expected.

The fjord was wider now, with lower mountains on the opposite side. The leaf fall season was more advanced and together with the coolness of the day gave it the feeling of November. Extensive roadworks before Alta delayed us, with diversions for tunnels and some very rough surfaces. The Kafjord tunnel led to a particularly long detour up the hillside and eventually down to join a long cycle track along the E6 through Alta, past the airport and to the campsite. There was a lot of traffic around the town, which is the biggest north of Tromsø. All these built up areas are equipped with wide shared use paths, with a zebra crossings where they cross side roads so none of the “cyclists dismount” nonsense that blights such facilities in Britain.

Solvang Camping actually closed at the end of August but staff were working on the site and were able to rent us a cabin for a very reasonable 300 kroner, our arrival at 19:30 being late for camping in the fading light. Kitchen and washing facilities were excellent.