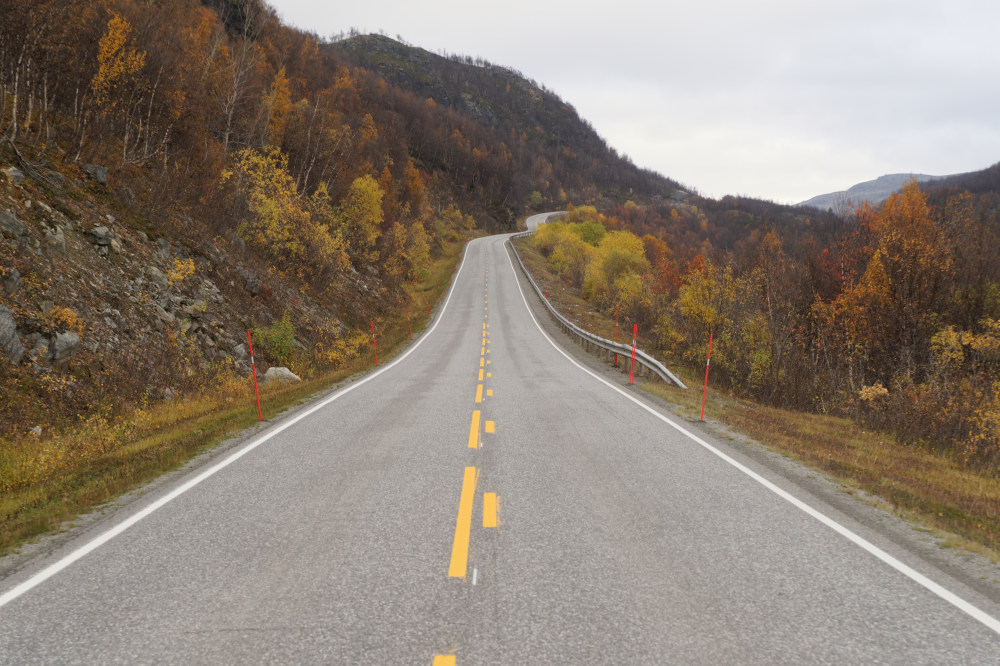 The carpenter at Camping Solvang told us that snow is not unusual at this time of year, and that the winter storms could start at any time now. He was a cheerful chap who enjoyed the long summer days so he could enjoy sunshine after work and didn’t mind the midwinter as the moonlight on snow was quite bright. We packed and rode steeply up to the high plateau, easy cycling once we’d overcome the hill. Up there the breeze was cold but warmth, sunshine and calm conditions returned when we descended into Skaidi. There had been nothing in the 73 km we’d cycled and there wasn’t much at Skaidi either, only two petrol stations stocking mainly hardware items but just sufficient in food to enable us to obtain supplies for tonight and tomorrow’s breakfast. Skaidi is essentially a truck stop and long distance bus interchange station with a café.

The pass over to Olderfjord was straightforward, climbing up then a few undulations and down again. We parted company with the E6, the main north-south road through Norway and the west coast of Sweden from Trelleborg to Kirkenes close to the Russian border. It is 2,084 km long. We turned left along the E69 which runs from here to the North Cape, Olderfjord Hotel Russenes Camping was a couple of hundred metres along.

As we arrived, a young French cyclist greeted us. He’d ridden all the way from his home city of Lille to the North Cape and was on his way back to Alta for the flight home. The owner arrived, very affable and said we could camp anywhere and pay in the morning. We could use the hotel kitchen and lounge, there were separate showers. We appeared to be the only guests at both the hotel and the campsite as the French cyclist was wild camping a little further along. He’d called to enquire about using the shower and the owner was amenable, it just needed 10 kroner in the slot. The site was excellent value at 95 kroner.