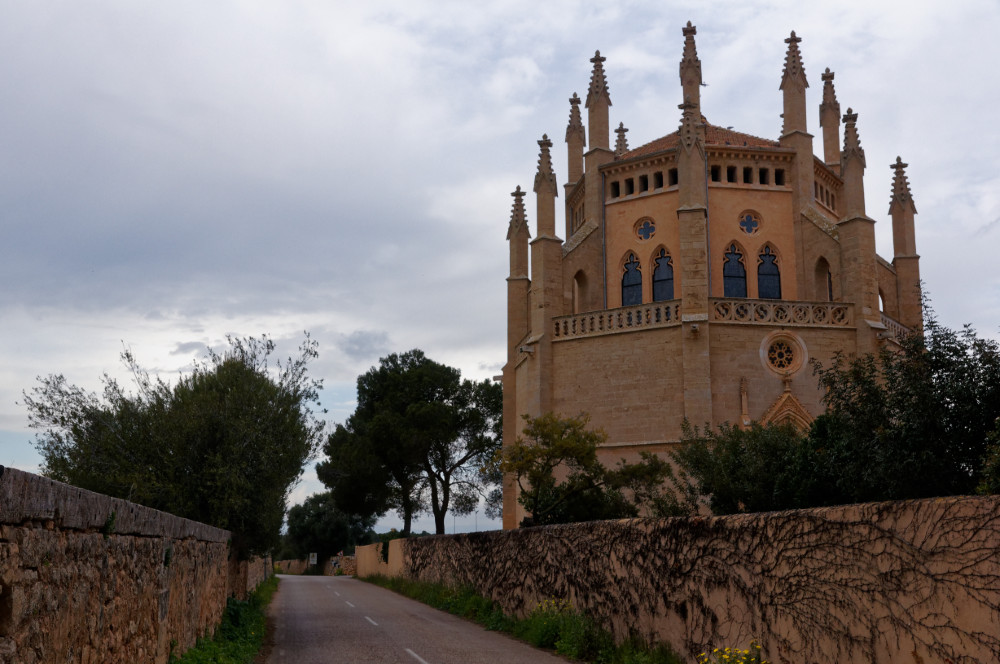 We packed for our journey home and cycled past the cathedral and along the promenade to the airport. There had been scant information on a cycling route into the airport, avoiding the motorway and we had great difficulty finding one. Eventually we arrived at a roundabout and two policemen standing at the side directed us past a Carrefour supermarket and commercial centre to a service road which led us to the airport.

We’d allowed plenty of time for the ride but the tortuous route finding had delayed us to the extent that we were getting a bit worried so we were relieved to get into the departure hall and check the board, which told us our flight was….. cancelled!

I stayed with the bikes while Christine joined the long queue at the EasyJet desk where it was explained that French air traffic controllers were on strike again. They would pay for us to stay at a hotel until we could fly home but the next flight to Liverpool wasn’t until Friday, this would be Good Friday as Easter was approaching. Alternatively we could fly to Bristol at 11:00 so we opted for that. It would just cost us some extra train fare, if we’d driven to Liverpool Airport it would have been awkward.

A taxi took us and our bikes to the large modern Playa de Palma on the sea front, four star with luxurious bedrooms but the food was served cafeteria style and there was little choice for the vegetarian. After lunch there, we went for a ride to Cap Blanc, first along the promenade but then onto the road to the Cap which was wide, busy and not very pleasant for cycling. We decided to abandon the idea and took a side road which led us through farmland past a windmill and an impressive church. An old road close to the motorway took us back to the coast and along the promenade to the hotel.

The hotel dining room was much busier with families staying for Easter combining with passengers delayed by the strike. We spoke to a couple who were delighted at having a few days free holiday before flying back to Liverpool but it wasn’t the sort of hotel and location we’d enjoy so were glad to be leaving the next day. In the evening we tried to find a more straightforward route to the airport as there was a track which crossed the motorway over a footbridge towards the airport but the direction was unclear at the other side so we decided to play safe and take the same route in the morning.

We skipped breakfast to ensure we were at the airport in good time, flew to Bristol and rode towards the city centre on the A38. We encountered a railway station on the outskirts so caught a train to Temple Meads, saving us the city route finding. From there, a train took us to Newport to connect with the afternoon locomotive hauled service for Bangor and a ride home in the dark, arriving at 22:20.