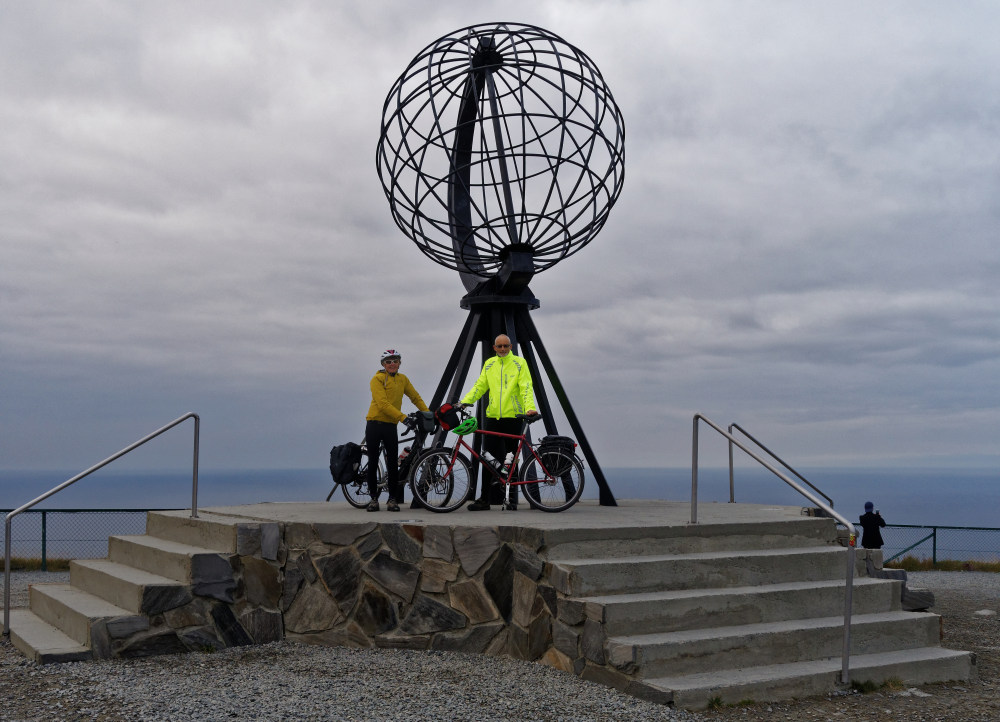 The day began cloudy and cool, some sunshine was in the forecast but instead we got a couple of short showers as we tackled the hilly road to Nordkapp. We breezed past the admission booth as the motorists queued to pay their 260 kroner per person admission.

A few minutes later, the service bus and five chartered for Hurtigruten passengers pulled in. We walked into the impressive Nordkapphallen and ordered coffee and almond cake to warm up while the coach passengers took their photographs by the globe. As the cruise passengers have all their food provided on board, the café was of no interest to them. Nordkapphallen was built in 1959 and extended in 1988. In 1997 a new entrance hall was added and today the building can accommodate several thousand guests.

Nordkapphallen is open only from 11:00 to 15:00 at this time of the year, it includes a large restaurant which was closed, there were few in the café and only a scattering of cars in the large car park. The scene would be very different in midsummer and we were so pleased to be here out of season.

We photographed the globe and the “Children of the World” sculpture, started in 1988 when author Simon Flem Devold randomly selected seven children from seven countries (Tanzania, Brazil, USA, Japan, Thailand, Italy and Russia) to visit the North Cape to dream of “Peace on Earth”. During their seven day visit, each child made a clay relief symbolizing friendship, hope, joy and working together. In 1989 the reliefs were enlarged, cast in bronze and erected in a semi-circle outside the North Cape Hall.  A “Mother and Child” monument by sculptor Eva Rybakken points toward the seven disks.

Before the ride back, we indulged in a second coffee and cake then looked at the fascinating exhibition explaining the wartime around the Cape.