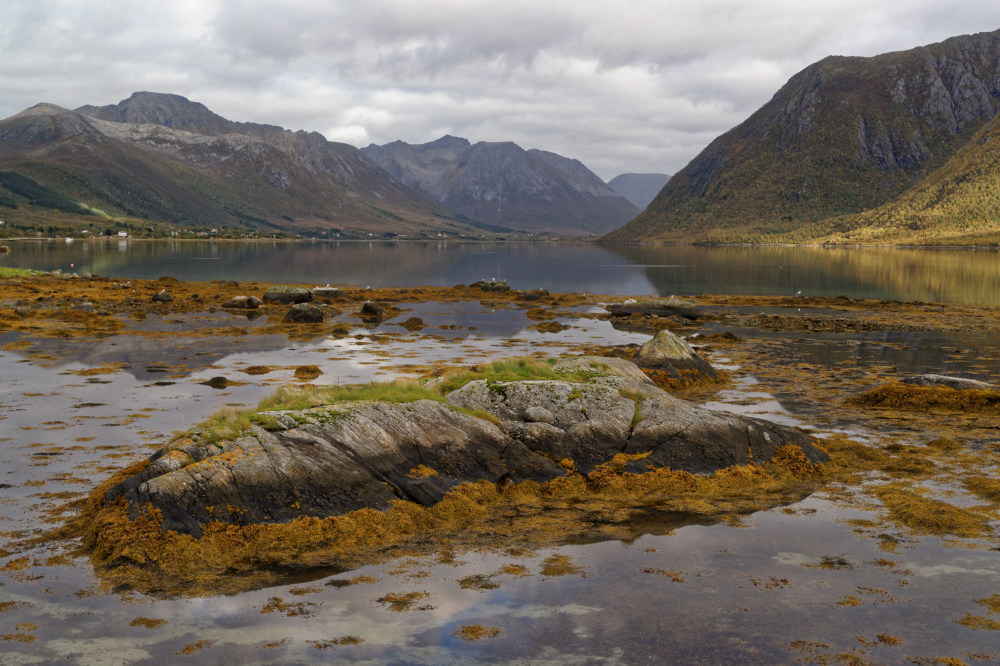 It was a cooler night so I was able to sleep despite this being a noisier site, close to the main road and with a lot of rain in the night. It had ceased by morning, which was cloudy with a few blue patches. We had to reply to emails first, making it a leisurely start, turning left over the causeway and the long steep Hadsel bridge, opened in 1978 and spanning the Langøysundet strait between the islands of Langøya and Børøya of the Vesterålen group. The lanes were quite narrow and a number of big wagons with trailers passed us, not very bike friendly for a supposedly environmentally conscious country, I hope they would incorporate better cyclist safety into new designs. We were glad that conditions were calm, a side wind could have been uncomfortable.

An alternative cycle route to Sortland was signed but at 56km rather than 22 so we kept to route 82 with sea and mountains to our right. We ate lunch at a picnic bench behind the co-op in Sortland, not the most salubrious spot and not warm either. The weather forecast predicted sunshine but there was precious little. There were few cafes on our route but the arts centre provided us with a place to warm up, assisted by coffee and chocolate cake.

Back on route 82, another long steep bridge took us onto Andøya after which the road was much less busy and the next bridge longer and more gently graded. The sky cleared, allowing the autumn colours to appear more saturated.

This was the only day on the schedule that I was not eagerly anticipating, with an 04:30 ferry departure from Risoyhamn, a settlement with a population of 200 and no accommodation. There’s a hotel and restaurant with attached campsite 12km before, I’d contacted them with a view to eating there, after which we’d play it by ear. We arrived at Andøy Friluftssenter and were welcomed by Nigel, originally from England but who married a Norwegian and is fluent in the language. They don’t have any vegetarian dishes on the menu but they cooked us a very acceptable vegetable risotto, we also had dessert and I tried a Mack porter from the world’s most northerly brewery, a lovely warming brew at 7% abv. Nigel very kindly phoned the Hurtigruten representative to ask him to open the waiting room for us and was happy for us to remain in the restaurant until they closed.

We stepped out into a clear cold night with our first sighting of the aurora borealis. It was not a strong display but the overhead green ribbons of light ushered us to the ferry port in the darkness, a beautiful experience. I was too cold to consider setting up the tripod and was content to enjoy the show while riding through the night. We set up our sleeping mats and bags in the waiting room for a few hours sleep until the Hurtigruten man arrived at 03:50 to await the arrival of the MV Vesterålen.