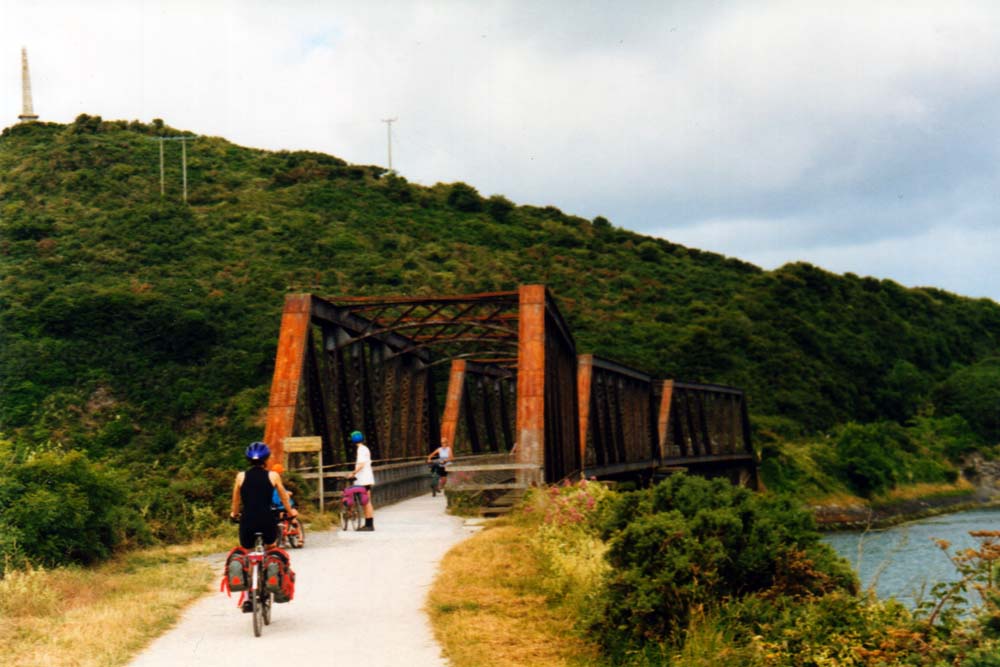 We’d looked round Wadebridge the previous evening so we headed off for Padstow along the Camel Trail. Wadebridge is an attractive small town with a lovely old bridge spanning the Camel – the name is Cornish for a crooked stream. Until 1964 the Atlantic Coast Express provided Padstow and other now-marooned resorts with a direct rail connection to London and allowed holidaymakers a wide choice of holiday destinations in south west England. In 1967 all services to Padstow ceased, the rails were lifted and the trackbed abandoned. Later North Cornwall District Council re-opened it as a cyclepath and footpath from Padstow to near the terminus at Wenfordbridge.

The famous bridge (above) over Little Petherick Creek, completed in 1899, saw only 67 years use before the line closed. Sir John Betjeman often travelled this way and described it as “the most beautiful train journey I know”, but traffic was always very seasonal and as such the line attracted the disapproval of Dr. Beeching as Britain sank deeper into the dark age of reducing public transport and mass car ownership. We stopped for a picnic at the rebuilt Boscarne Junction,  where the freight line to Wenfordbridge diverged from the line to Bodmin. This is currently the western terminus of the Bodmin and Wenford railway.

We paused at Hellandbridge to admire the last remaining mediaeval bridge across the Camel – all the rest were swept away by floods in the 19th century. The Camel Trail continues a little further but the West Country Way takes its leave at Tresarrett, where we pushed our bikes up a steep hill to Blisland and refreshment at the Blisland Inn. While the others chose the sensible soft drink option I couldn’t resist trying the local brews, Blisland Pride and Independence Day Ale, direct from the barrel – excellent brews both.

Luckily we we didn’t have far to go for our overnight stay at Camelford. Our B&B was basic but cheap and very friendly, with secure cycle storage in the porch. After a shower we endured a short but uncomfortable walk along the narrow A39 to the town centre with traffic whizzing past us by inches – it’s bizarre how the Health and Safety Executive can insist that a quiet railway line is securely fenced while allowing pedestrians to rely on the good judgement of motorists to stay alive.

Camelford is a pleasant market town bisected by a racetrack, the 30 mph speed limit being widely ignored. Being a Sunday evening only one place was serving food, the Mason’s Arms. The vegetable stir-fry would have been improved by a more generous ration of vegetables. The St Austell Timers Ale was very good indeed, the stronger Hicks Ale less impressive but still very pleasant.