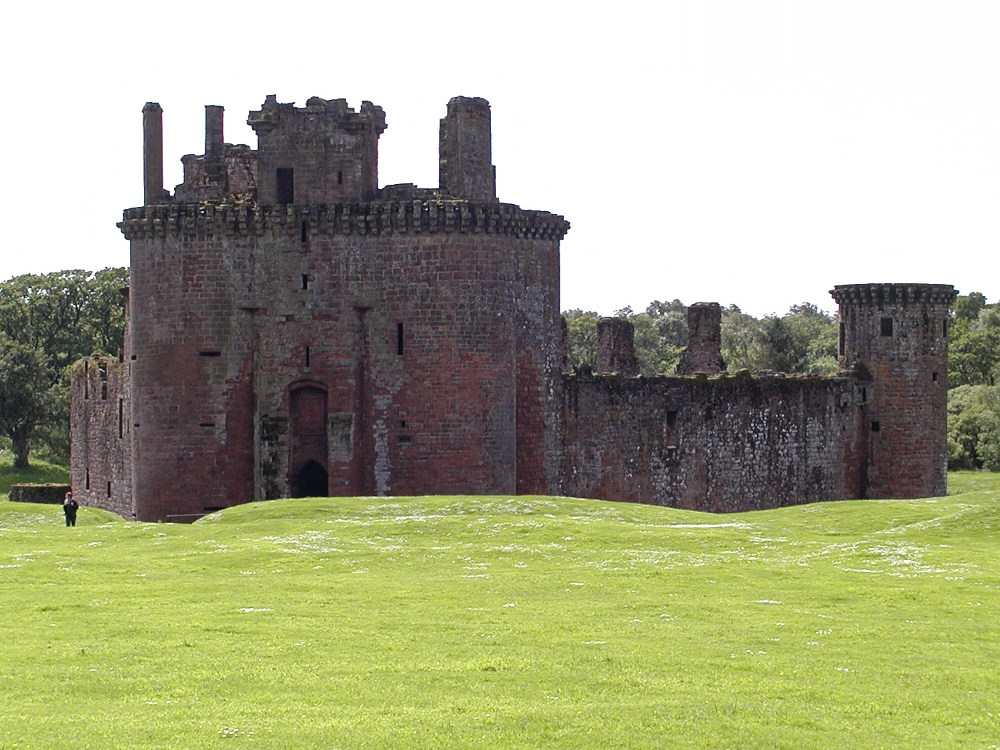 I slept well after I’d roused myself to close the bedroom window, left open a tiny amount to allow in some fresh air but delivering an icy blast at my neck. Today’s wind fight began at 09:30 through pastoral lanes, Rowan again very slow so we were cycling 15 minutes then waiting ten for him to catch up, so it was impossible to get into any kind of rhythm. We paused for coffee and cake at the unusually shaped Caerlaverock Castle café but progress had been so slow that we had no time for the tour.

The wind was behind us for a time as we enjoyed a lovely ride along the Nith Estuary with the sand flats of the Solway Firth merging into the horizon before we entered Dumfries, where we collected the first of the twelve stamps which would prove our eligibility to buy a cool route 7 teeshirt. Actually we had no idea what they looked like, but we wanted them anyway. The Nith at Dumfries is spanned by two stone bridges and a modern footbridge which was our route out of town.

The wind was again attempting to blow our teeth out along the exposed Old Military Road to Castle Douglas, an attractive small town which we reached just before the tea shop closed for the day. We were worried that Rowan wouldn’t make it to Gatehouse if we took the official route, which swings out onto the headland and back into the town. We opted for a direct route along minor roads, old route 7 signs showing it to have been formerly the official route so it didn’t seem like we were cheating – shame we missed seeing Kircudbright though. While waiting for him in the middle of nowhere, a man walking down the road stopped for a chat and told us he’d graduated from Bangor University, where I work, in 1958. His neighbour was from Amlwch, which again is close to home.

We stayed with Deirdre Carlisle at 29, Fleet Street though we didn’t see her but her artist husband. We ate at the Murray Arms Hotel in this very quiet and interesting old town, with the tiniest town hall I’ve ever seen.