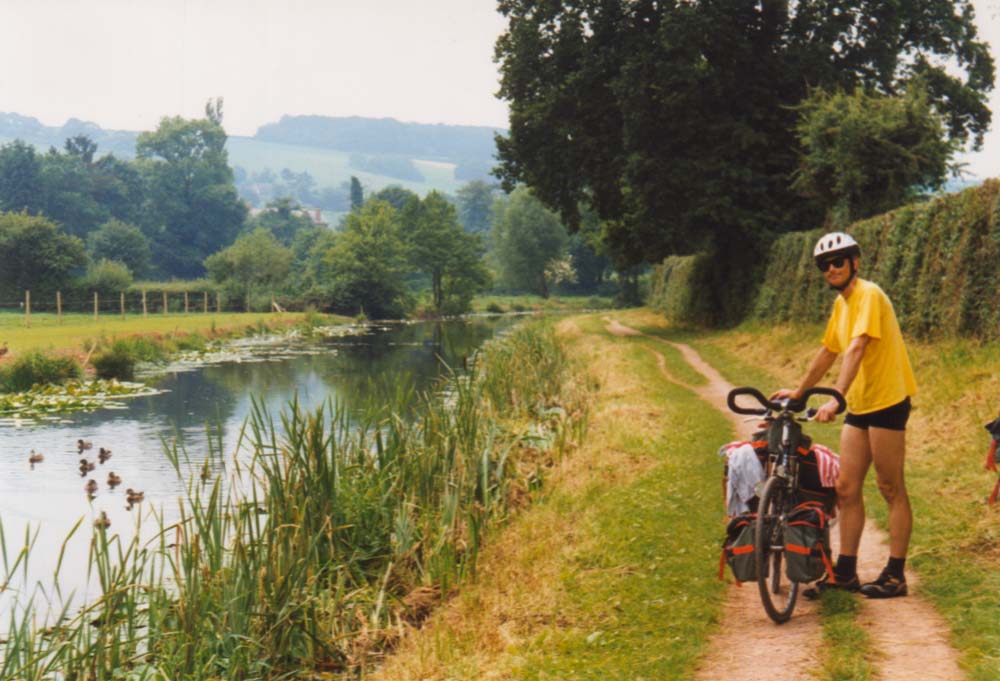 We got off to a brisk start, leaving at 9:20 and stopping off at the town deli and greengrocers for wholemeal & cider bread, sandwich fillings and fruit. It was overcast and not too hot, which was lucky as we had a lot of climbs along narrow country roads to start the day. A short off-road section took us past Knightshayes Court then back onto roads into Tiverton, a pleasant small town but not sufficiently interesting to tempt us to linger. By now it was again very hot so we were pleased that the next section was along the the trackbed of the Great Western railway line which once served the town. Tiverton residents now have to go out to the former Tiverton Junction station, now known as Tiverton Parkway.

This path was very quiet and we stopped at a picnic bench for lunch. Christine had chosen the healthy option of hommous while Rowan and I had been unable to resist the Devon Oke cheese. We couldn’t detect any cider in the bread!

Before long we had to rise up to road level at a bridge. On the other side were ploughed fields and no-one would ever have guessed that a railway had ever passed this way. Had the alignment been kept it would have made a very useful access route for cyclists to the main line at Tiverton Parkway, a convincing argument for Sustrans and local authorities to convert suitable disused lines where there’s no likelihood of railway reinstatement.

Luckily Sustrans had reached agreement for cyclists to use a stretch of towpath of the Grand Western Canal, a lovely tree-lined section with ducks and waterlilies. We had to return to the road for a while but paused for a drink outside the Barge Inn at Halberton. It was too hot for beer and cycling so I had a long soft drink. The roads here weren’t so hilly but any exertion was hard in the heat and we were thankful when the route delivered us back to the canal, though at first nettles pushing out onto the narrow towpath were a torment. After a while the towpath broadened but we were directed off and back on for short sections. Arriving at Taunton at five, we went straight to the Bike Chain for our stamp then looked round for somewhere to eat.

I was happy to settle for one of Yates’s veg curries but Christine had other ideas and eventually we ended up at Healthy Habits, where the deal was eat as much as you like for a main course comprising salads and hot food at £5.95.  We managed three platefuls each before leaving town for the Taunton and Bridgewater Canal. I love summer evening cycling and the three-mile ride along the towpath to our B&B at Creech St Michael in the cool of the evening was perfect after a big meal.