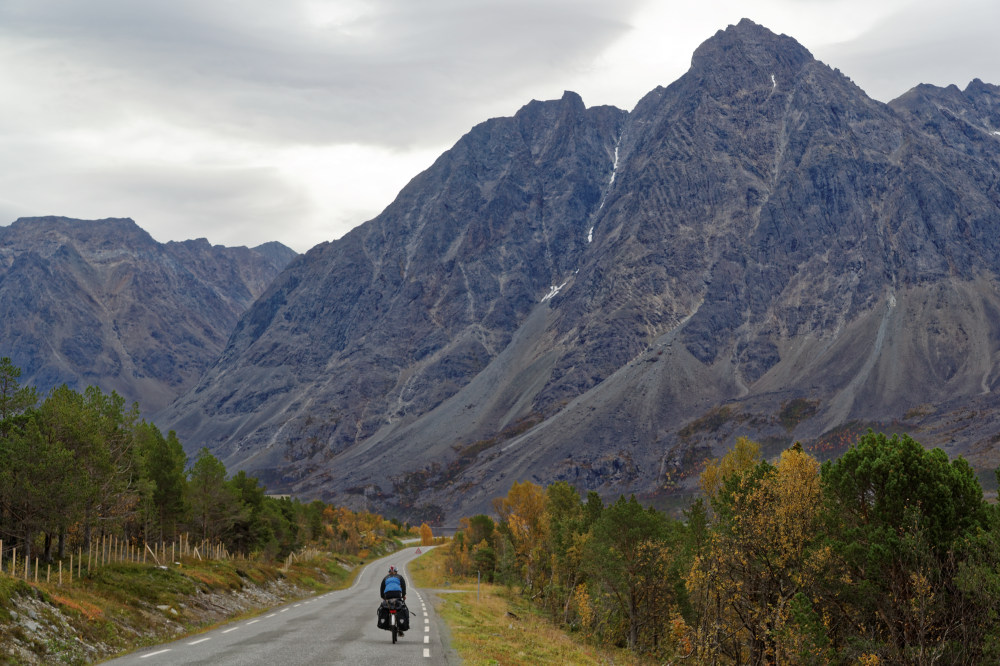 Why Norway, Why September?

This adventure was inspired by Matthew, the “arctic cycler” who described his ride at https://arctic-cycler.com/biking/bodo-nordkapp-norway-2012/
I found the idea of a route stating at Å and ending not at B or Z but at the northernmost point of Europe irresistible. Like most visitors to the far north, Matthew visited for the midnight sun and statistically the best weather. We were more interested in the possibility of seeing the aurora borealis so chose September, hoping the autumn storms wouldn’t be early. Matthew took the Andenes-Gryllefjord ferry, which ceases running in August so we amended his route to take the longer passage from Risoyhamn to Tromsø, part of the Hurtigruten coastal ferry circuit. We made a couple of other alterations, the main one being a detour to Havøysund for the Hurtigruten to take us round to Honigsvåg, avoiding the 7 km undersea Nordkapp tunnel.

The brexit catastrophe made an already expensive country 10% more so, but it also made us 100% desperate to escape this land of little englanders so we pressed on with our plan to explore the northern extremity of our continent.

Our accommodation would be primarily at campsites, either in our tent or in a rented cabin. This was the only option along much of our route but also catered accommodation in Norway is very expensive and we didn’t want to sleep through an aurora in a hotel room. It was seven years since we last camped, and material science and design has moved on so much since then that we replaced almost everything, staying in hotels would possibly have been no more expensive.

We were a little apprehensive about a camping holiday spent entirely within the arctic circle but this quote from Maria Balshaw, director of the Whitworth and Manchester art galleries reassured us : If I feel a bit sick at the thought of in idea, that actually means it’s exciting. That feeling in the gut makes me realise that this is a challenging and therefore sensible thing to do”.

The ferries from Britain to Norway having long ceased to run, overland travel was not a practical option. With bikes to transport, we needed to minimise flight connections so we looked into flying with Norwegian Airlines from Gatwick to Trondheim, staying overnight at an airport hotel then catching the train from the airport station to Bodø. Then I read that Norwegian don’t accept bikes in bags from Gatwick, which the airline confirmed. I subsequently learned that they’d changed the rule and bags are now accepted but in the meantime we’d booked with Scandinavian (SAS) to fly Manchester-Oslo-Bodo. The return from Alta was more of a problem, the SAS booking engine would only offer Alta-Oslo-Copenhagen-Manchester with only about an hour between connections. We weren’t comfortable with that, not knowing whether or not we’d have to collect and re-check our bikes and bags but accepted it with the philosophy that a problem returning is minor compared with a problem on the outward journey. Another worry was that we had to book and then get confirmation that there was room on the flights! SAS give you 24 hours to cancel the flight and say they expect to confirm special luggage booking within 24 hours so we went ahead. I booked around 17:00 and next morning found confirmation in my inbox so we were all booked and committed.