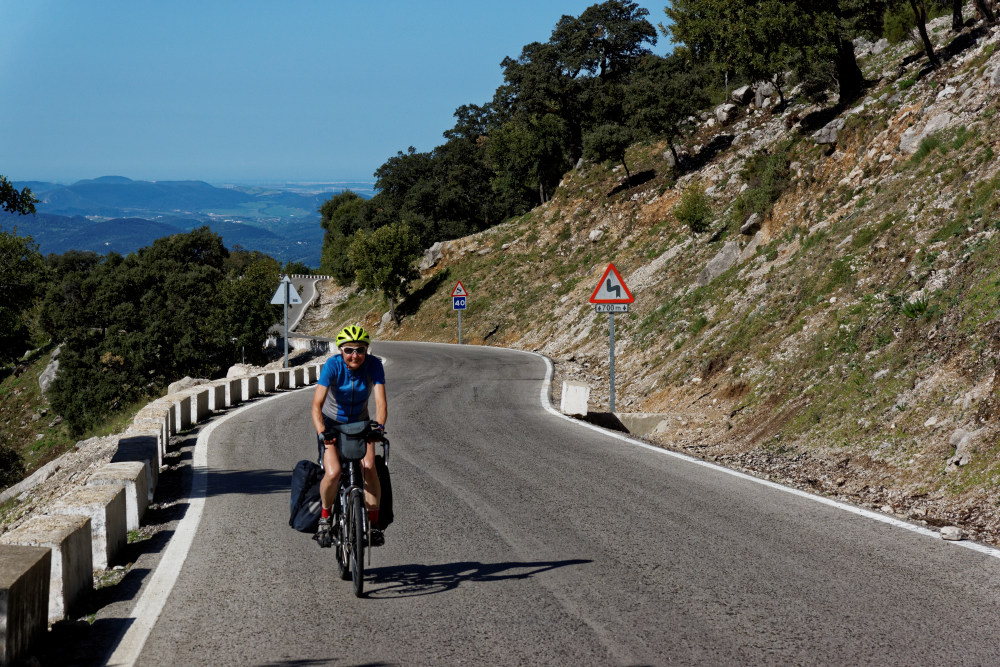 Despite the dog affected sleep, we were up early so we could accomplish the 15 km continuous climb to the top of the pass by midday. We dropped off the keys at the bar, gratefully accepted a complimentary espresso and began the ascent to 1103 metres. While I waited for Christine to catch up so I could take this photograph, a short tailed eagle flew across but the lens on my camera wasn’t the telephoto. We also saw a group of Spanish ibex grazing in the shade. At the top, a German film crew were setting up for making a documentary about a long distance hiking trail that crosses these mountains.

After the fast downhill freewheel we had to work hard to toil up to Ronda during the hottest part of the day. The town was busy and it took a while to find the El Tajo hotel. They locked our bikes away and after freshening up we toured the town with its amazing Roman bridge and gorge. This is a tourist town with a Parador hotel, Spain’s upmarket chain. They had the best vegetarian menu so we ate there. The meal began with complimentary olives, bread and a small glass of white wine, then we both had a grilled vegetable stack followed by an unusual pureed mushroom and rice dish. To finish, I had a custard square with chocolate dessert while Christine enjoyed a chilled strawberry soup with green tea sorbet. Everything was beautifully presented. The wines were very expensive so I had a beer and Christine chose water.