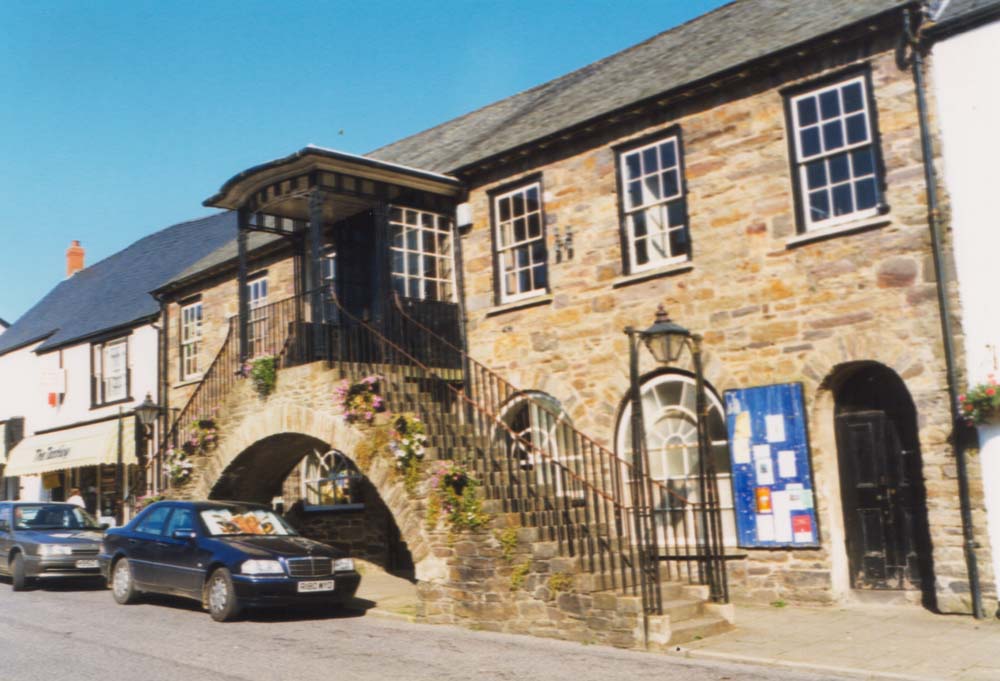 So back over the bridge, up to the old station and onto the Tarka Trail again towards Barnstaple, passing the old station at Instow and the UK’s first listed signalbox – fine views ahead of the Torridge estuary with Appledore on the opposite bank. Instow, just a couple of miles on from Bideford, looked a nicer place to stay. The cycling was very easy along this section, dead level with no wind, warm and sunny and very few people on the trail.

The path veers off towards Barnstaple just before the station, still part of the national network, and we followed it round to the leisure centre for our stamp before enjoying a quick look round the town. Barnstaple is a very attractive town with the Long Bridge over the river. We treated ourselves to a very nice apple & pear pasty, did a little shopping, then we were off again.

The names of these North Devon towns were familiar to me as a rail-mad spotter in the sixties. I used to dream of south west summers steaming along in a Southern green train behind a West Country class pacific, perhaps one of
34005 Barnstaple
34006 Bude
34008 Padstow
34016 Bodmin
34019 Bideford
34031 Torrington
34032 Camelford
34036 Westward Ho
I glimpsed some of these exotic engines on trips to London:
34007 Wadebridge
34022 Exmoor
34097 Holsworthy
and a few more but I’d have loved to have seen them in Devon on a hot summer’s day.
Barnstaple has fared better than most North Devon resorts in retaining any kind of rail service.

There’s a very good network of cycle paths out of town but they’re signed for locals rather than route 3 and we carried on where we should have headed for Whiddon Valley. By now it had developed into a really hot sunny day and we had to climb to the summit of Exmoor at its hottest, along narrow high-hedged lanes which trapped the heat. We were hoping to reach the top before having a very late lunch but the heat and the gradient slowed us right down so we collapsed by the roadside to eat at 2:45.

Our water supplies were perilously low and we looked forward to a long cold drink at the Sportsman’s Inn, the only source of refreshment between Barnstaple and Dulverton, a distance of around 30 miles. We were exhausted by the time we reached the summit and even then the road undulated though the predominant gradient was downhill. The roads were very quiet. At a desolate spot on the moor we paused at a monument to P. Froude Hancock, 1865-1933 with a plaque asking people not to deface it, else it would upset many people. Nobody had. A few yards along we photographed a stone which read BOUNDARY of the MOORLAND MEMORIAL to P. Froude Hancock subscribed for by over 500 of his friends. I was intrigued by this and an appeal on this page produced the following additional information and a photograph:

“Philip Froude Hancock, universally known as Froude, was my wife’s great-uncle. He was a partner in the cider brewing firm of Arnold and Hancock in Wiveliscombe. In his youth he played rugby (prop) for Blackheath and England and is still on record as the second heaviest man to play for England. He was a founder member of the Barbarians. His chief love was hunting – he rode chiefly with the Dulverton Hunt and with the Devon and Somerset. In his old age he could no longer follow the hunt, but used to ride up to a point close to where his monument stands to get a good view of the proceedings and was a familiar figure at that spot. He was born 29th August 1865, died 16th October 1933.”
Thanks to Guy Roberts for solving this mystery for me.

Finally, gasping, we reached the Sportsman’s Inn, looking ominously quiet, surely it couldn’t be closed? There was a sign on the door. CLOSED. Dulverton 10 miles. Weather still very hot. We took our dry throats to Dulverton, a delightful small  old town full of fascinating unspoilt old buildings, a stone bridge, old direction signs, were it not for the cars we could have been back in the fifties.

There were also two pubs but our B&B for the night was a couple of miles outside town and we’d booked a meal there, served at 7:00. We needed to clean up first so had to press on.