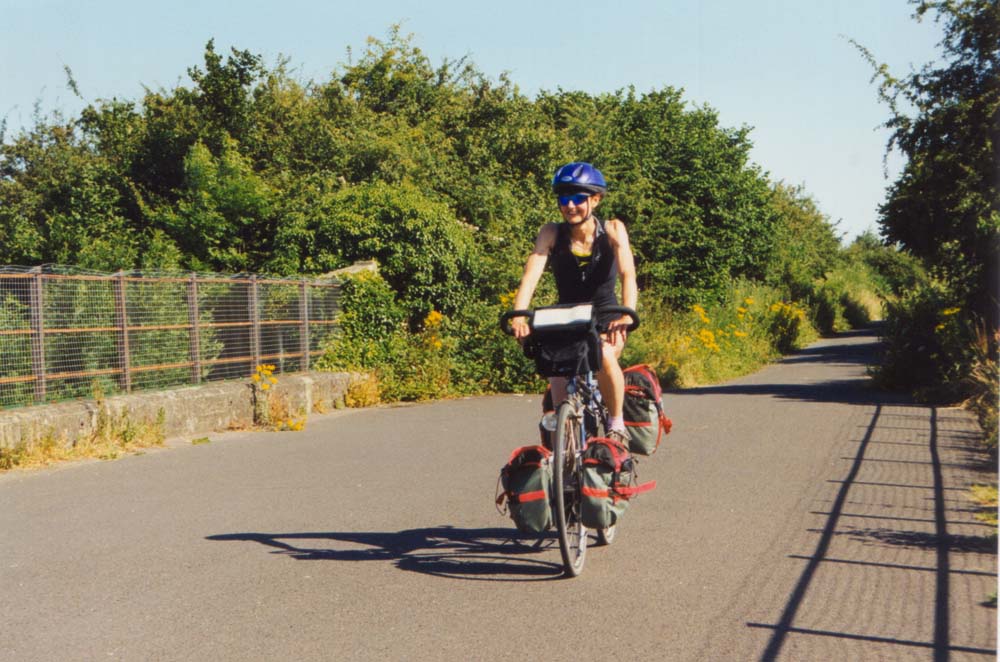 We woke early to such a perfect summer morning that I was inspired to venture out for a final look at the city centre before we breakfasted at 8. By the time we’d paid, applied our suntan lotion, refilled our water bottles, retrieved our bikes from the garage and loaded up it was almost 10:00 so we called in at the nearby Tesco for our picnic provisions. By now a pleasant cooling breeze had sprung up.

We cycled out of town and through the tourist village of Wookey Hole before climbing up a steep narrow lane. A sign at the botton warned THIS ROAD IS NOT SUITABLE FOR CHARABANCS. Despite my fascination with old signs I didn’t pause for a photograph as we’d just passed a couple of horseriders. It was busy with their successors and no doubt would be crawling with them by the afternoon but the road became very quiet by the time we reached Priddy on our way to the summit of the Mendips. We enjoyed fine views of the surrounding countryside and saw lots of cyclists as we traversed narrow lanes and a short section of track.

We were hoping the alternative route round Chew Valley Lake would be ready but there were no signs so we pressed on down a steep narrow lane. We passed through the lovely village of East Harptree, whose centrepiece is a clock with the motto Time flies – don’t delay on the wooden clock surround and Heaven’s light our guide on the eaves.

We had our picnic by the side of a quiet road above Chew Valley Lake. At Pensford we paused to photograph the massive GWR railway viaduct which still dominates the village after the line’s closure.
The wind had abated by now and it was sufficiently hot to melt the tarmac. The terrain was undulating and we were exhausted from pushing up the hills. At last we reached the Bristol-Bath cycleway, built along a railway trackbed, but called into a nearby pub to slake our prodigious thirsts before pushing up to join it. The cycleway was busy but not congested, a great run which took us past the preserved Avon Valley Railway and into the town. It was diverted at one point to avoid the massive earthworks for yet another new road.

The Youth Hostel is a tall building facing the river, perfectly positioned for the city centre yet quiet. After showering we found a pub with a good selection of beer and interesting vegetarian choices only to be told they’d sold out of food. We failed to find anything comparable so finished up at an Italian restaurant before a stroll round the docks and back to the Youth Hostel. It was still very hot at 10:15 as the light began to fade. People were cycling along the waterfront and sitting drinking outside the pubs and we were impressed with the relaxed friendly atmosphere. It was another sultry night but eventually it cooled down sufficiently to allow sleep. In the morning it was cloudy and much cooler. Our homeward trains were again comfortable and punctual.