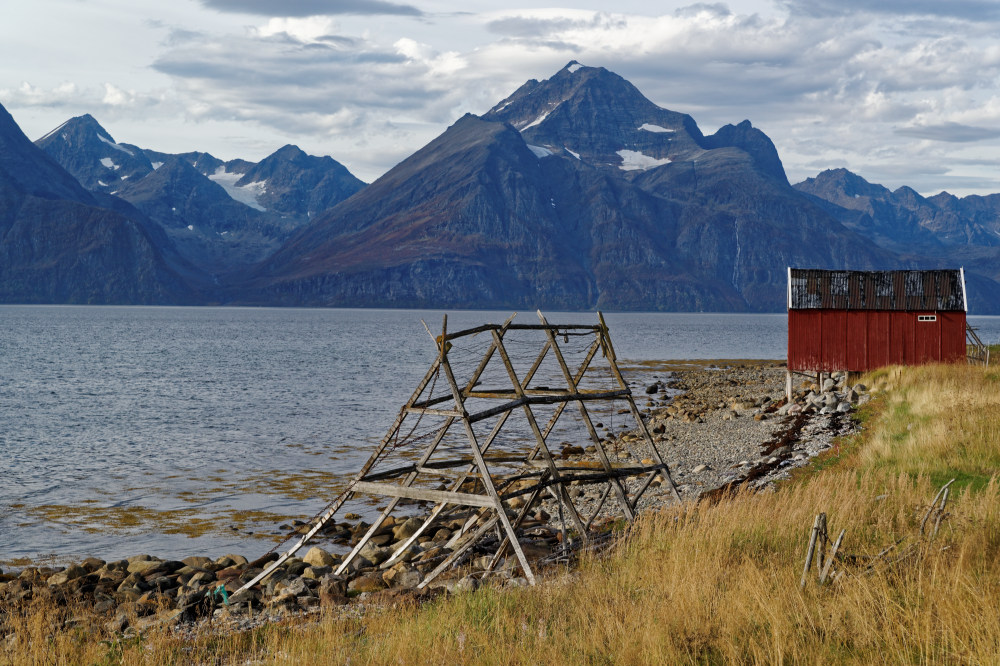 Since we were short of food, we skipped breakfast in the hope that there would be a cafeteria on the next ferry, allowing us to save ours for Monday. We were at the ferry terminal at Lyngseidet an hour before the first sailing which left at 10:50 after an easy 21km ride over a pass with high mountains across the fjord. At a sunny 17°C it was again warm enough to ride in shorts and teeshirt.

We were lucky with the catering too, filling up on muffins, pastries and coffee during the forty minute crossing. Route 91 ended at Olderdalen where we landed and turned north along the E6, not too busy but with the occasional large truck and a few camper vans. To our left across the fjord was a long mountain range, peaking at 1500 metres with glaciers. We stopped for a minimalist lunch at picnic tables, just one roll with peanut butter each, overlooking the fjord.

The clouds rolled in soon after and the scenery was less dramatic as we toiled over a high pass. There was more traffic now and some sections where road resurfacing and widening was in progress with dusty rough surfaces. From the top we dropped down a 9% gradient into Storslett, where to our delight and surprise the Joker supermarket was open, so we wouldn’t be going hungry.

The last 15km to Fosselv Camping were a slog, the landscape looking scrubby in the low light. We arrived at 17:45, paid our 100 kroner for a night’s camping, pitched the tent, showered, washed clothing and ate.