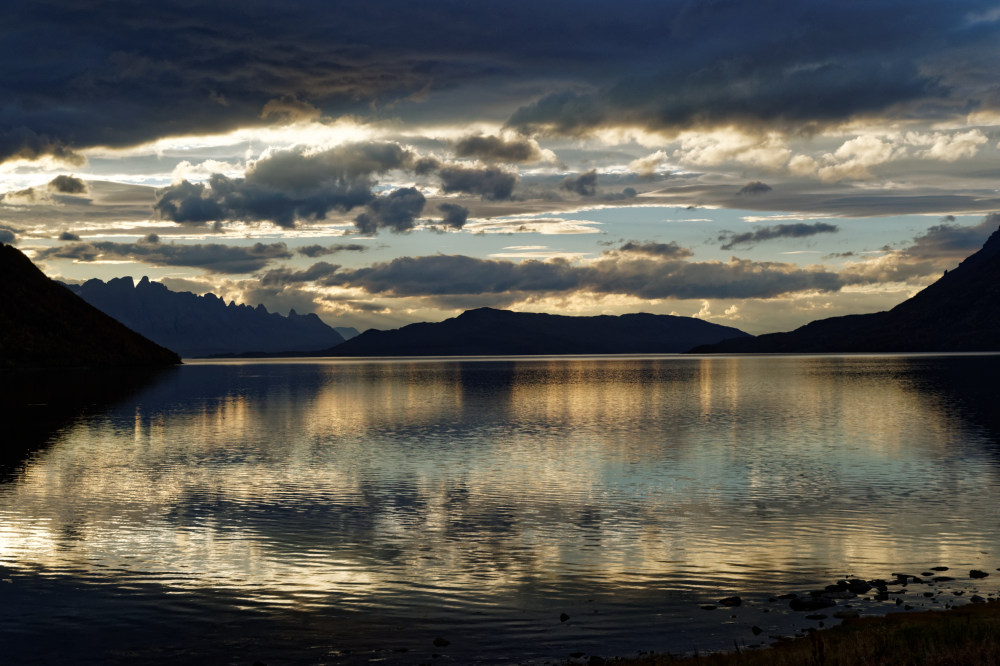 The night was cloudy with some rain, again scuppering the chance of an aurora. The overnight temperature was again in double figures and I was too warm in my sleeping bag. Why does it take us three hours between rising and departing? Bathroom activities, changing clothes, sorting out overnight washing, cooking porridge, making tea, slicing and eating bread with spread, taking down and packing the tent, loading the bikes, checking emails and the weather forecast… quite a lot to do, but three hours?

The first 15 km or so were easy, no wind and a nice ride close to the fjord. Then came a long hard slog up and over a pass as we struck off inland across a headland, sweltering in my longs as my shorts were drying on the back of the bike. The summit was 400 metres but felt a lot higher. The long freewheel downhill took us back to the fjord which we skirted and then crossed by a bridge. A lower pass took us over another headland then we had some respite before toiling up a 280 metre pass in the rain.

After coasting back down to the sea it was a fairly easy ride to the Co-op in Burfjord to stock up and another 9 km to Arctic FjordCamp for the night. It’s in a lovely setting but the man in charge had a poor attitude, the only one we encountered on the trip. He told us there was no kitchen so we had to use our camp stove and gas for the first time in the fading light. A couple drove up, asked about renting a cabin and were incredulous when told there were none available. In fact none were occupied, only ourselves and a couple of camper vans were there, and the campsite is advertised as being open all year. Later we spotted that there was a kitchen, he was too lazy to open it for us. At 143 kroner it was one of the more expensive sites.